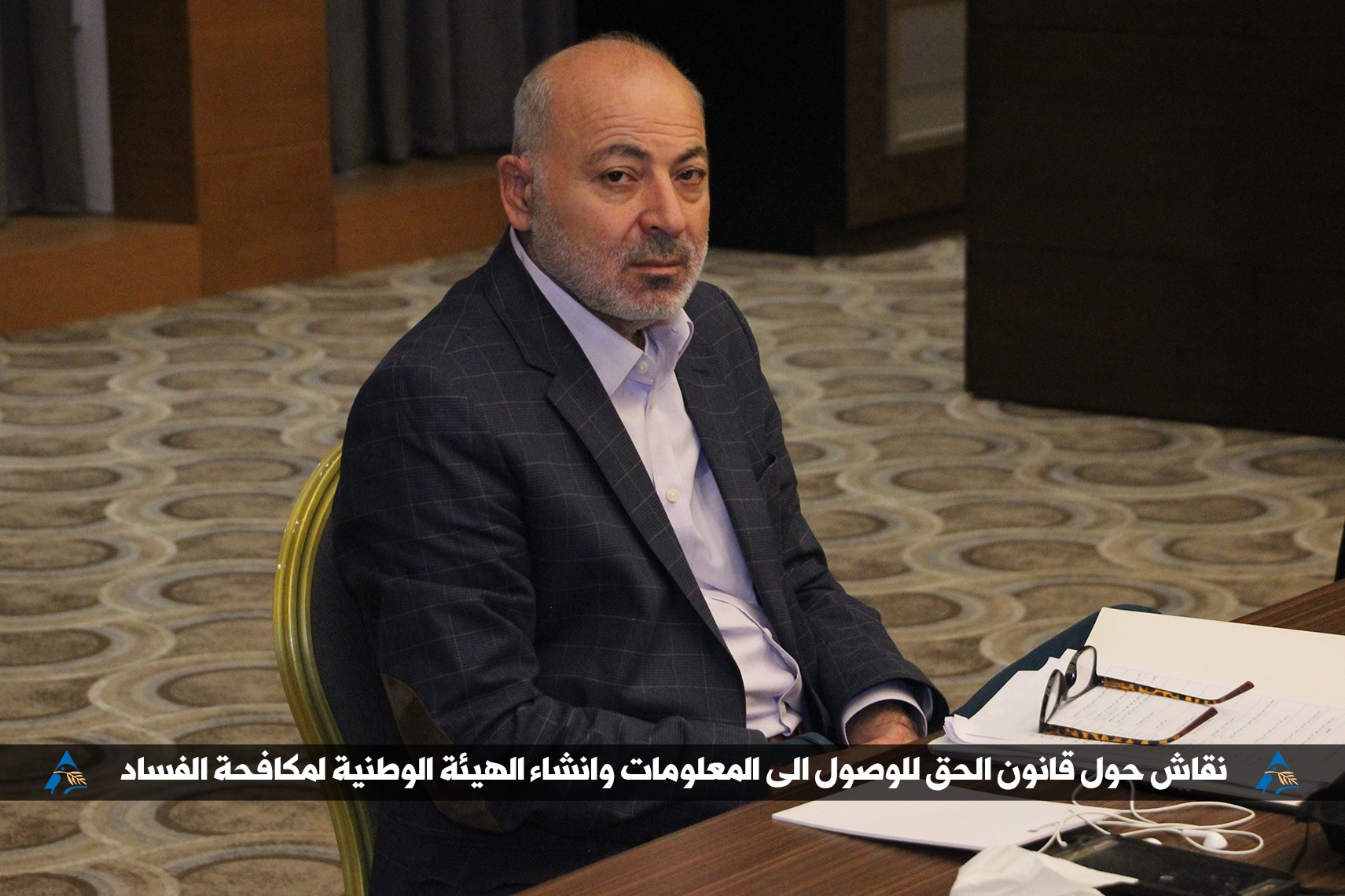 ▪ Member of the Coalition for Promoting Parliamentary Openness, Transparency and Effective Oversight.

▪ Member of the Steering Committee: "Building a rule of law society: to enhance of Democratic Governance and rule of law"

▪ Acknowledgments from USAID - Lebanon to participate in a training workshop on institutionalizing monitoring and evaluation.

▪ Acknowledgments from USAID - Lebanon to participate in training on the M & E framework, standards formulation and benchmarking paper for performance indicators.

▪ Consultant and supervisor over Transparency project and Trainer, the launch of the Syrian Transparency network, and Transparency Conference in Syria, in collaboration with CCSD support by Hivos (2015)


▪ Supervise and conduct research on Transparency in the Budgetary Process and the National Integrity System Survey.

▪ Contributed to the drafting of the first annual Arab Anti-Corruption Report.

▪ Made comments to the Lebanese Ministry of Finance on its improving transparency initiatives in the framework of the partnership in transparency between the Ministry and LTA.

▪ Contributed to the work of Transparency International (TI) in the Arab Region.

▪ Supervise the implementation of the Youth Civil Society and Leadership program in
partnership with IREX.


Training and Research April 1988-to date

 Preparing a field study on the reality of social protection and the effects of the economic and financial collapse on the labor market in Lebanon (April 2021), support by LOWER and Oxfam

 Preparation of a report on violations of M-community workers. Appointed to work for the LOWER and Helem Society, with the support of the Friedrich Ebert Foundation, March 2021


 A Guide on the most important provisions of Labor Arbitration Councils in Lebanon (May 2020), Support by Friedrich-Ebert-Stiftung -Foundation-Lebanon

 Completion of a study and report about the violation of Labor laws and National Social Security Fund by the Commercial Sector in the Greater Beirut area, in collaboration with LOWER and RosaLuxembourg. (January 2019)

 Enact a policy paper on transparency and good governance in the waste management sector in collaboration with Nahnoo. (November 2018)


 Advocacy campaign with members of Parliament to enact laws on transparency in the Oil and Gas sector in collaboration with LTA. (August 2018)

 A quantitative and qualitative study about Lebanese, Syrian, Palestinian and other workers, decent work standards, minimum standards of work in addition to formal and informal work in the services sector and the food and beverages sector commissioned by ALERT international and Lebanese Labor Watch. (February 2018)

 A qualitative study about street children in the greater Beirut area was commissioned by ASMAE and the ALPHA association. (August 2017)

 Facilitator in the foundation of the (AIN) network for integrity in the Arab world commissioned by NED and LTA. (July 2017)

 A quantitative and qualitative study about Syrian and Lebanese workers, decent work standards and minimum standards of work commissioned by Oxfam and Lebanese Labor Watch. (2017)

 Preparing a guide for employers in the Bekaa Governorate on the internal regulations of the labor institutions and the minimum standards for work and decent work commissioned by Oxfam (March 2017).

 Training municipalities to formulate strategic plans commissioned by Oxfam, a project funded by the European Union (January and February 2017).

 Completion of a study about the violation of Labor laws and National Social Security Fund by the private sector in collaboration with LOWER and Diakonia - Sweden. (March 2017)

 Preparing an educational guide for teachers and vocational, technical and university education on the Lebanese labor law and social security law for the benefit of the Lebanese Observatory for the rights of workers and staff members in Lebanon) December 2016).

 Prepare a guide on writing and project management of civil society organizations working on the accountability of the World Bank projects in the Middle East in favor of the Bank Information Center in Washington (December 2016).

 Training expert within the project for the benefit of Oxfam, DPNA, Arc En Ciel supported and funded by EU (2016 -2017)

 Associate Member of the Amman conference of social accountability, which was held at the invitation of CARE Egypt and the support of the World Bank (2015)

• Training of Arab civil society organizations’ members on fighting corruption and reporting according to the UNCAC, and building networks among them and other international, regional, and local organizations. Yemen, 2009.

 Training of the Iraqi Commission for Public Integrity and the Iraq Foundation on ways to fight corruption and build networks in partnership with TI, 2008.

 Training facilitators for the Youth Civil Society and Leadership program on ways to recruit and attract young leaders, 2008.

 Trainer for the Civic Forum in South Lebanon on conflict resolution in partnership with UNICEF, 2006-2007.

 A study on social relations in the village of Riak, 2004.

 Training secondary school teachers on the new interactive ways to present the material of Economy and Sociology courses. The educational center for research and development, 19982002.
 Research on the conditions of education in mid-Bekaa. Patriarchy of the Melkite Roman Catholics, 2000.
 Contributed to a study on emigration from Ain el Mrayseh. Ministry of Foreign affairs and emigrants, 1996.
 Participated in research on the behavior of football fans conducted by the Lebanese University, 1996.
 Contributed to a study on social relations in Ain el Mrayseh. Lebanese University-Social Sciences Institute, 1996.
 Participated in research conducted on social relations of the immigrants in Beirut. Lebanese University- Social Sciences Institute, 1996.
 Conducted research on the mixed marriages between guys from the gulf and girls from East Asia and their effects on spinsters’ rates, 1995.
 Participated in research on the worker’s conditions in Lebanon conducted by the Hiring National Commission (Ministry of Labor), 1994.
 Participated in two pieces of training conducted in Tunisia and Rome by CISL (Mediterranean Partnership) on the cooperation of syndicates in the Mediterranean countries, 1992.
 Bridging divide among young syndicalists with different religious backgrounds, a project by Friedrich Ebert in 1988.

▪ Joint workshop between USAID, Y.A.B, and Mercy Corps, 2009.
▪ “Roundtable on the judicial system in Lebanon,” Civil Liberties’ Defense Association “Adel” 2009.
▪ “Strengthening the role of CSOs,” Civil Campaign for Electoral Reform, 2009.
▪ “Strengthening the participation of the disabled,” USAID and Mercy Corps, 2009.
▪ “Social and Psychological effects of sexual harassments on children,” Ministry of Social Affairs and Kafa, 2008.
▪ “The CSOs needs,” roundtable discussions organized by the Ministry of Social Affairs and UND, 2008.
▪ “Role of the Youth in Fighting Corruption,” Youth Civil Society and Leadership Program, 2007.
▪ “Media in the Arab Region,” Arab Media Committee of the Arab Workers International Union, 1993.
▪ “Evaluation of the Arab Syndical Work,” Tunisian General Union for Work Conference, 1992.